#YourOdds by William Hill William Hill’s increasingly popular ‘YourOdds’ feature will give you access to a massive range of offers at a variety of prices.
by Leon Hughes on 16th August, 2019 and updated 20th September, 2019 4:42pm 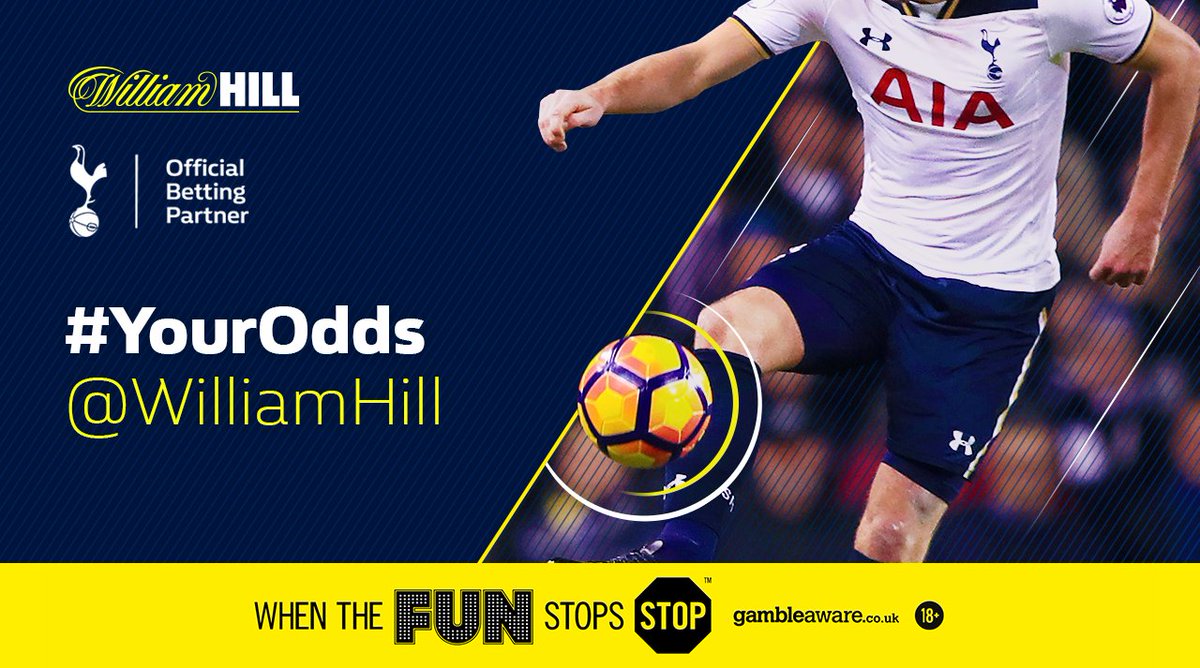 Manchester City continue their charge towards a third successive Premier League crown this weekend with an intriguing home tie against Tottenham Hotspur in Saturday’s late kick-off.

Pep Guardiola’s side started their campaign in emphatic fashion, blowing West Ham United away in a 5-0 demolition at the London Stadium. Now back at home in Manchester, Spurs should offer a much tougher test to City’s title credentials, however they are the side in form and will be expected to claim all three points. Here at Compare Betting Sites we look at some of the incredible offers on the table with our popular betting partner, William Hill. As one of the UK’s largest bookmakers, William Hill will be offering hundreds on betting markets on the Premier League’s stand-out fixture and we at Compare Betting Sites want to ensure you have all the tools to make this weekend a profitable one!

William Hill’s increasingly popular ‘YourOdds’ feature will give you access to a massive range of offers at a variety of prices. Separated into numerous categories, including Star Man Specials, Twitter Specials and four others that have been filtered by price. Here we discuss some of the more intriguing offers available, from the dead certs to the bets so crazy that they may just come off!

Saturday will be four months to the day since these sides played out a famous seven-goal thriller at the Etihad Stadium in the UEFA Champions League. On the opening weekend of the Premier League Manchester City fired five goals past West Ham United whilst Spurs scored three second half goals at home to Aston Villa. Therefore, one thing almost guaranteed when the sides meet on Saturday is goals!

City’s incredibly successful blueprint includes creative wide men and overlapping full-backs, therefore both Spurs full-backs, Walker-Peters and Rose could be in for a busy afternoon. At 7/10 this Twitter special could prove to be the best value bet of the weekend.

Kevin De Bruyne plays a pivotal role in Manchester City’s passing game and although he completed a modest 48 passes against West Ham United last weekend, he is likely to surpass that in what will certainly be a far more competitive encounter at home to Spurs.

Meanwhile, Christian Eriksen is undoubtedly the main creative force at Spurs. The Danish international started on the bench against Aston Villa but after completing 24 passes in just 26 minutes on the pitch, Eriksen should easily pass the 55-pass mark at Manchester City.

Sterling and De Bruyne are quickly becoming Manchester City’s two most influential players. De Bruyne’s creative influence was sorely missed last season as the Belgian’s season was disrupted by injury. Now back and fighting fit, De Bruyne bagged an assist against West Ham United. With Sterling firing in a hat-trick in that game, the De Bruyne to Sterling combination is one we should get used to seeing this season.

Two things guaranteed ahead of Saturday’s match is that Manchester City versus Spurs will be ultra-competitive and played at a breathtakingly fast pace. Those two factors could increase the chances of both a red card and penalty being awards – especially with VAR now in use!

Raheem Sterling To Score, Kyle Walker & Aymeric Laporte Both To Be Carded - 35/1

35/1 could prove a real bargain here. Raheem Sterling is in the form of his life at the moment and bagged a hat-trick last weekend. Sterling has also scored four goals in his last three games against Spurs. Kyle Walker is playing against his former club and that added dimension could see the England full-back overstep the mark once or twice. Walker did pick up a yellow card at West Ham. Statically, Laporte is less likely to pick up a booking having received just three yellow cards throughout the 2018/19 campaign. However, coming head-to-head with Harry Kane will mean Laporte could resort to the dark arts to retain the upper hand in their personal duel.

If Spurs are to win at the Etihad then Harry Kane is highly likely to be the match winner and the England forward has a knack of scoring from distance. Kane scored twice in last weekend’s win against Aston Villa, one of which was scored from outside of the box.

Just four months have passed since Spurs dumped Man City out of the Champions League back in April. In the breath-taking second leg of that tie, Spurs raced into a 2-1 lead after just ten minutes before falling 3-2 behind with barely 21 minutes on the clock. With that game in mind, this 300/1 bet could be just about crazy enough to happen!

Kane and Sterling scored five goals between them on match day one, if both sides come flying out of the traps once again then seeing both on the scoresheet before the ten-minute mark is an extreme possibility.

To make use of any William Hill #YourOdds promotion just simply sign up to the popular bookmakers via Compare Betting Sites and you can earn not one, not two but three £10 free bets when you make your first £10 deposit.