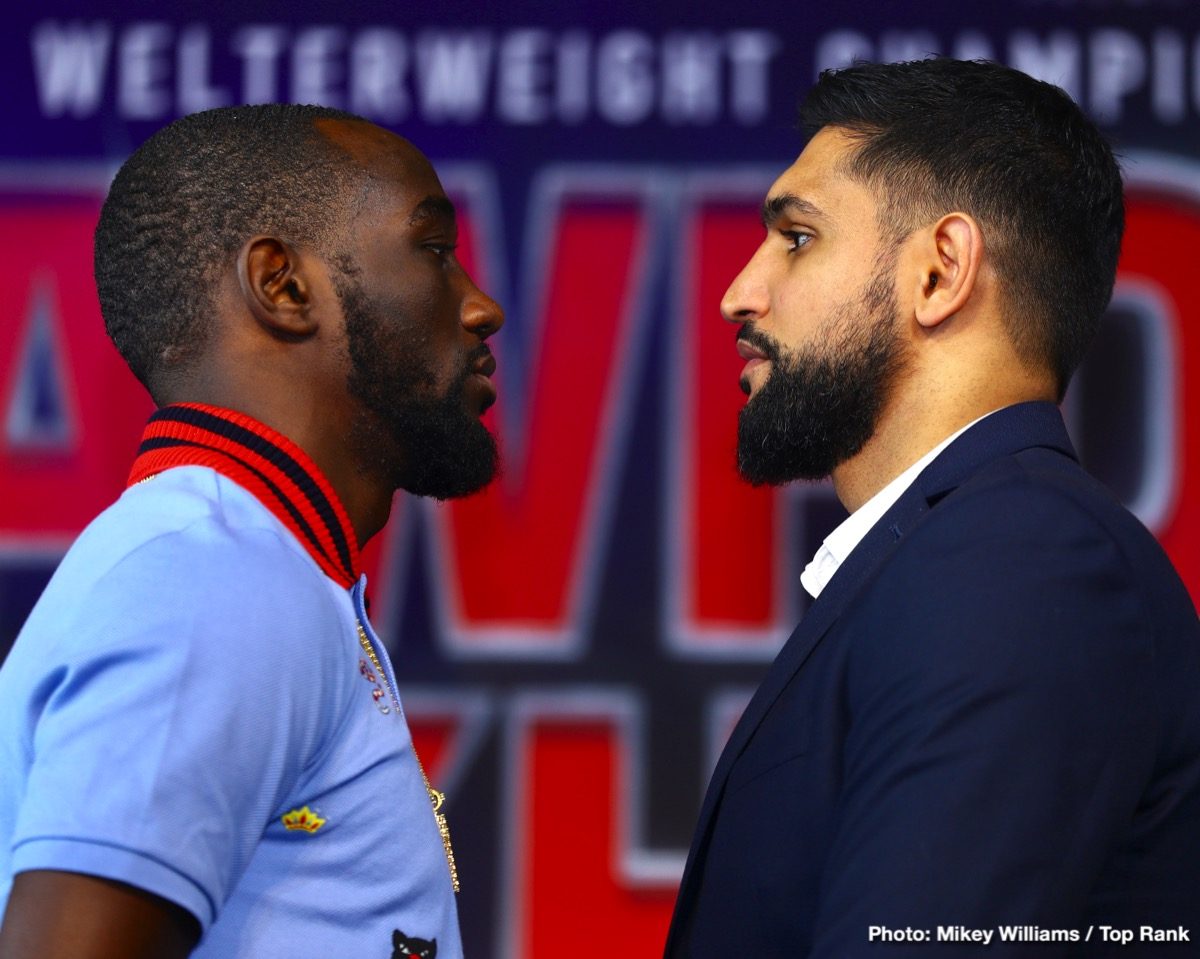 Terence Crawford is a 31 year old undefeated American boxer. His professional career consists of 34 fights which have all been victories (25 knockouts).

The talent of “Bud” Crawford is recognized by all - fans love him, and the experts put him on the top of various lists of the best boxers of all time. He does not have some kind of crazy single blow – usually he wins ahead of the ending of time due to his consistency of his total number of strikes. Crawford's style implies a neat beginning and a gradual build-up of pace in the second half of the fight.

At a first look, Terence currently surpasses Khan in all key components - excellent timing and the ability to consistently box equally well make him almost unbeatable.

Khan is a British fighter that in the past was considered one of the most promising boxers in the world and to a certain extent, he justified the expectations of the experts. Khan had 37 fights in his career and was able to win 33 of them.

The advantage of Amir in the upcoming battle may be the speed of his hands. But such a highly skilled boxer as Terence Crawford can easily eliminate the opponent's only joker with his excellent timing. In addition, the boxer's jaw has been pierced, and the current champion will certainly want to take advantage of this.

In the general tenor of many boxing insiders, Terence Crawford emerges as the clear favorite. Some 'bad tongues' even talk about a mismatch! Although Amir Khan was once allowed to own the world championship titles of the IBF and WBA in super-lightweight, hardly seems that the 32-year-old Briton will have a real chance to win.

Former world champion Paulie Malignaggi: "Khan has no chance!" A similar opinion also comes from the former Amir Khan opponent Paulie Malignaggi. The former champion lost to Khan in May 2010 by TKO in round eleven. Now Malignaggi spoke up and gave a damning prognosis for the meeting. Malignaggi: "I do not see a big chance for Amir! Maybe a few years back he could have done something against Crawford. "

Although Amir Khan has long been considered an exceptional boxer and has scored notable victories over Marcos Maidana and Zab Judah, heavy knockdowns, such as those against Danny Garcia and Canelo Alvarez, earned him the reputation of a boxer with the famous "glass mind".

“Look at my track record, look at those I beat,” Khan told TMZ. “My record is much better than Terence Crawford’s. My rivals were better, and I beat better rivals. Well, he did not lose, but I’m sure I would also be undefeated if I had the same rivals that he had. ”, he added.

Crawford, however, wittily retorted this statement by Khan. “I guess he climbs out of his skin trying to advertise himself,” ESPN quotes Crawford. - We had one common opponent [Breidis Prescott] - and he knocked out Amir Khan. He would not be undefeated if he met with all my rivals. "

For the sake of this fight, Khan once again refused to fight against his compatriot Kell Brook (38-2, 26 KOs). British fans suspect that Khan is terribly afraid of losing to Brooke.

“And as for the rest, these fights have nothing to compare. Fighting against Crawford, again in the USA, at the legendary Madison Square Garden ...” says Khan. “... and, most importantly, this is PPV. This is the first PPV show on ESPN over the past 20 years. Shane Mosley fought last on ESPN PPV. So I just couldn’t refuse the chance to become a PPV again. ”

Khan resumed his collaboration with trainer Virgil Hunter. He comments on the fight with Crawford: “I’m definitely not going to blame Khan for this decision. I agree that this fight costs more. Yes, he is an underdog. But there is a plus: no one will blame him if he is defeated. Also also I don’t think  that now the fight with Brooke has lost its value. I’m looking at Brooke’s career and I think he’s not recently agreeing to any risky battles. This means that he is waiting for a fight with Amir Khan. I think their face-to-face fight could take place at the end of the year. "

“I don’t know the motives of Khan,” says Hunter. “I asked him why he took the fight with Crawford, and not with Brooke. He answered me:“ The fight with Brooke will not get anywhere from me. ”And you know what? I agree with that, yes, it’s true. They don’t love each other, but both of them have already passed their career peak. Therefore, if there is good money at stake, then both should agree. "

British boxer Amir Khan shared his expectations from the fight with Terence Crawford:  “We both got a pretty good deal, but I consider myself to be a fully prepared light-middleweight boxer who beats well. I haven't lost to any welterweighter. In this weight class, I feel comfortable. In other weight categories I find it more difficult, for example take my fight with Saul Alvarez which  made me understanding at that moment that I had no room for error. In the end, I lost my strength which sent me to a knockout.

Even though Amir Khan is very confident on his capabilities, Crawford is a strong fighter with excellent technical skills that can not be treated lightly. For winning, the brit has to make a perfect fight without any mistake. “I am not going to treat this fight as if I am a stronger and more powerful fighter who will overclass his opponent. IQ will help me winning the battle", highlighted Khan  during an interview.

To sum up, Khan has to fight flawlessly to win this match. If Khan can catch Crawford hard and clean in the early rounds and get his attention and respect he has a chance to take him into the later rounds and out box him. That is of course a huge assignment. We've never seen Crawford fighting on his back foot against a bigger talented fighter.